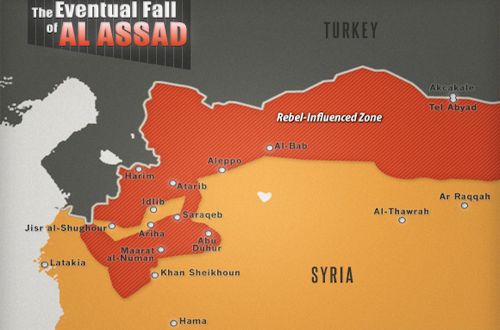 Will Obama be content if the Free Syrian Army can keep the North of Syria and finish taking Aleppo?

Will he decide that Syria should be divided into three states, and thus, give the rebels enough arms and military power to take Damascus as well as Aleppo and drive the regime and the Alawite religious group that predominates within the regime back toward the western coast of Syria, where Alawites constitute the majority of the population?

Or will Obama possibly decide to back the rebels with enough firepower to destroy the regime altogether, occupying both the predominantly Alawite and Kurdish regions of Syria?

Now that President Obama has decided to champion the opposition militarily, he must set out clear goals and explain his vision for Syria’s future.

The obvious choices that Obama must choose from are three:

If the US decides to help the Sunni Arab rebels go for a total victory, it must take responsibility for ensuring that ethnic cleansing of Syria’s minorities is not carried out by the empowered Sunni Arab majority. Only an international peace-keeping force can guarantee against unnecessary bloodshed if Obama hopes to arm the Sunni militias for a clean sweep. Many of the militiamen make no bones about their desire for vengeance or their belief that Shiites no longer have a place in their country. This is to be expected after the brutal beating they have taken at the hands of the Alawite-dominated Syrian Army.

For those who dismiss the dangers of ethnic cleansing, it is worth remembering that after the defeat of the Third Reich in WWII, over 12 million Germans were driven out of Poland, Czechoslovakia, Hungary and other Eastern European states, where they had lived for hundreds of years. So too, were the Armenians and Greek Orthodox driven from Anatolia by Ottoman and Turkish troops during the terrible fighting that swept over the region from 1914 to 1922. Anatolia was close to 20% Christian in 1914. By 1922, less than 1% remained, as over three million Christians were cleansed or forced into a population exchange with Greece, which expelled some half a million of its own Muslims. More recently, Palestinians have been driven from their lands, destabilizing the region for decades. Iraqi Christians took flight from their native land as anti-Christian violence grew to a crescendo with the attack on Saydet al-Najat Church in 2010. Their numbers fell by over half. Ethnic cleansing is only one of the dangers that President Obama must protect against as he builds up the rebels into a more lethal fighting force.

If Obama wants rebels to take Damascus, he must guarantee that that fighting does not destroy the city, as happened to Aleppo. If he provides only howitzers, simple rockets and lighter forms of weapons, stalemate and fierce street by street fighting will ensure that Syria’s capital of some 5 million people is leveled. Another major wave of refugees will stream out of Syria.

President Obama is arguing that his new policy of supplying weapons in not really a change of policy at all, but rather a continuation of his previous policy of pushing for a political solution. But this doesn’t correspond to the Syria I know. I doubt that either the rebels or the Assad regime are willing or able to make the painful compromises needed to keep the country unified. This is a recipe for dividing the country along the present battle lines, give or take a bit.

He owes both the American and Syrian people a clear statement about what he sees as Syria’s future borders and how he plans to help Syria’s rebels build what he called a »stable, non-sectarian representative Syrian government that is addressing the needs of its people through peaceful processes.”
—
Dieser Beitrag »Obama Owes Syrians and Americans a Vision of Syria’s Future” erschien zuerst auf der Webdseite Syria Comment.
— 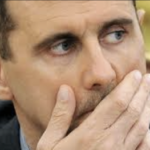 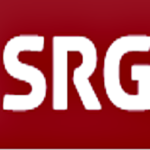 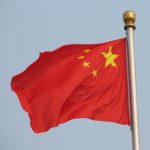